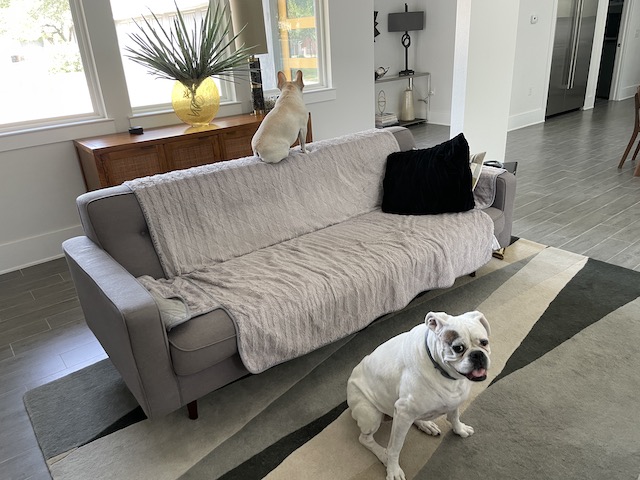 “Lucy. I think I hear Friday coming.”
“It’s the mail person, Twiggy.”
“That’s too bad. Sure sounds like Friday.”

It is Wednesday Story Day again, and last week we were there when Larry decided to call Cortez and arrange a talk. Also, another sniper has been deployed to take advantage of the possibility of taking a shot at Cortez and his crew. The plan is for Larry to drive the FBI sedan into the drive and then go inside to talk with Cortez. This sounds super dangerous. Larry has pulled the car into the drive and got out with his hands in the air. I can see someone in the house waving him to come inside. We better get there, so we don’t miss a thing.

“You got any weapons?”
“No, you can search me if you want.”
“Yeah. Hold still and keep your arms out away from your body. There that should do it. Looks like you’re clean. Here you can keep your phone.”
“Told you. Thanks.”
“Can’t be too careful.”
“Where’s Cortez?”
“In the next room. Follow me.”
“Ah, Larry, my good friend. Come in have a seat. Would you like anything to drink?”
“I could use a water, Joachim.”
“Of course. Anything for you. Juan, get him a water.”
“Okay, Joachim. How did you get yourself into this mess.”
“You know I’ve been asking myself the same question. These guys just showed up here with the hostages and pretty much forced their way into my house.”
“You allowed that? The most powerful man in North America. Check that. The most powerful man in North and South America.”
“It’s funny, but I thought I could get these lunkheads on their way before you guys got wise. But, unfortunately, you were too fast.”
“It was that Escalade out there. Do you know one of your guys killed an old lady to get a hold of that?”
“Yes, one told me, and I’m truly sorry. It wasn’t my idea to take that car. How did you track it anyway?”
“Long story short. Your boys got some carryout, and we traced the bill to the restaurant and picked up the car on surveillance video.”
“I’ll be damned. Shows you just can’t be too careful.”
“I’m here to make a deal.”
“Yeah? What kind of deal?”
“We need you to turn yourself in along with your henchmen. I think we can convince the DA to wave the kidnapping charges as long as you co-operate.”
“You know Larry. I like you because you remind me of my uncle Charlie. But you have to face facts.”
“What facts?”
“Number one. I run the biggest drug operation this side of Jersey City. Two. I have my hands on everything illegal in both North and South America. Three all these hostages are insurance that there are no witnesses against me. Till I get to a point of safety. I’ll let ‘em go then. Well, all except for Popović. He’s a traitor and needs pay for that.”
“Since you are in the confessing mood, let me ask about Sandusky.”
“Yeah, what about him?”
“You kill him?”
“Let’s just say I know a guy who knows a guy who put that lamp out.”
“On your orders.”
“When someone gets too greedy, it is time to put your foot down. Sandusky thought he could take my money and then cut me out of the action. That never works well.”
“So, he wanted his invention for himself.”
“I would say that is about the size of it.”
“What about Alexis Rafferty?”
“His death stunned me.”
“Did you do it?”
“You have got to be kidding. His wife and her lover Ned what’s his name ?”
“Dixon.”
“That’s it. Ned Dixon and Janice Rafferty figured out a way to get rid of Alexis so they could continue to play house. Pissed me off too. Alexis was a good man.”
“You didn’t need to get revenge?”
“Oh hell no. That was their business, not mine. Yeah, I missed having Alexis worked for me, but I got over it.”
“How did you know they did it?”
“Janis came to me, and after some pretty good love, making told me the whole story. She wanted me to get rid of Ned.”
“And?”
“How do the Italians say it? He’s swimming with the fishes.”
“What about Janice?”
“I figure she owes me. As I said, good lovemaking. I’ll give her a call someday.”
“So, what do we do now?”
“I would say you get your butt back out with your federales friends. Then y’all stand down while I take the two cars to the airport.”
“Can’t let you do that, Joachim.”
“Then you’re going to force me to take you hostage, as well.”