I want to Welcome Linda Mims to Fiction Favorites. She has just released her book The Neon Houses, and she is on tour with 4Wills Publishing. I am pleased she chose to stop by today.

My good friend, also named Linda, doesn’t own a Kindle and her iPad doesn’t hold any novels. Reason being, Linda is a former librarian, and her love for books runs deep. When asked how she thinks writers will communicate with readers in the future, she just shakes her head. Recently retired from more than 30 years spent in the preservation of books and their care, she loves nothing better than to crack open a real book and inhale the fragrance of a freshly published novel—preferably in hardback. Writing in the future is going to remain the same, as far as she’s concerned.

As an indie author who, to date, hasn’t tried vanity publishing or the Amazon interpretation of a physical book, I have a different view of what writing will be like in the future. My friend Linda may or may not read my ebooks when they’re published (she probably will), but I fear that if she doesn’t get onboard the ebook train, she will be missing out on some awesome future writers.

Today’s young writers are using both traditional publishing and self-publishing, and their work is rife with intellect, deep meaning, and skilled storytelling. They are poised to become the recorders of our lives, our chroniclers—the writers of the future. All indie writers are surging and telling their stories. They’ve seen what traditional publishers are touting as best sellers and decided they can do as well and, in some cases, better.

What do I imagine future writing will be like in 50 years? In my book, The Neon Houses I describe a scene where over half the population of the town, Gang Territory can’t read. The percent of writers in 50 years may not be any better than the percent of readers. It will be different! Virtual book sales will grow as will the methods of viewing them. Right now we have Kindle, Nook and iPad devices, but over the next few decades, other apparatus will crop up because there can never be enough great ideas and App designers will invent ways to enhance the reading experience with moving pictures, animated sounds, and a hyped version of reader immersion.

My guess, based solely on supposition and conjecture, is that the FCC will attempt to bring the world-wide web under the umbrella of regulated services. Users will have tired of hackers, identity thieves, predators, and foreign terrorists strong-arming the air-waves. A segment of people, who want to tame their own frontier, will run an internet outside government control, but without a lot of money for refinement and regular upgrading. They will be the crusaders and defenders of writing and free speech in 2065.

Writing of the future will resort back to the written (pen and paper) version of what it was in the mid 20th Century for many people. Communication between and amongst people will have returned, and technology and social media will take a backseat to social interaction where people actually meet and talk face to face.

However, the same fifty years could see Ebonics having taken control of language and communication in our inner cities. Facebook and 140 character Twitter lingo may have encouraged a form of modernist communication that will be spoken and written by only the technologically limited and the poorly educated.

Most public schools will have ruled out reading the classics and, sorry E. D. Hirsch, Jr., “Cultural Literacy” will be an obsolete idea, meaningful only to the very wealthy. Consequently writing in the future by inner-city school children will be random, infrequent, or nonexistent.

Fifty years from now, illiterate citizens will head to city parks on heralded “reading nights” to hear the classics read by those who remember how to read and to whom the skill was passed.

Linda Mims started creating tales in her head as a child. At age 12, she knew she was onto something when she sold a story to her grandmother for a quarter, but it was her dad’s more practical advice, to get a good education and find a real job, that she followed.
After retiring from her “real job” as an educator, Linda began her writing career as an indie author. The tale of The Neon Houses was born out of a careless comment that people had lost interest in reading. The joke was that decades from now we’d need to hold reading nights in neighborhood parks for citizens who wouldn’t be able to read.
Linda rolled that idea around in her head until it turned into a whole society of have-nots. Once the idea got rolling, she worked nonstop until she’d finished the first draft. Writing is now her real job!
Linda Mims resides in a small suburban town 30 miles outside of Chicago, IL where she likes to cook, garden, and blog, sometimes simultaneously. She is married to her long-time love, has two grown daughters and one bossy, bichon-pom, Alexis.
Twitter – http://www.twitter.com/boom_lyn
Facebook – https://www.facebook.com/AuthorLindaMimsmbria
Website – https://lindamims.com/blog/ 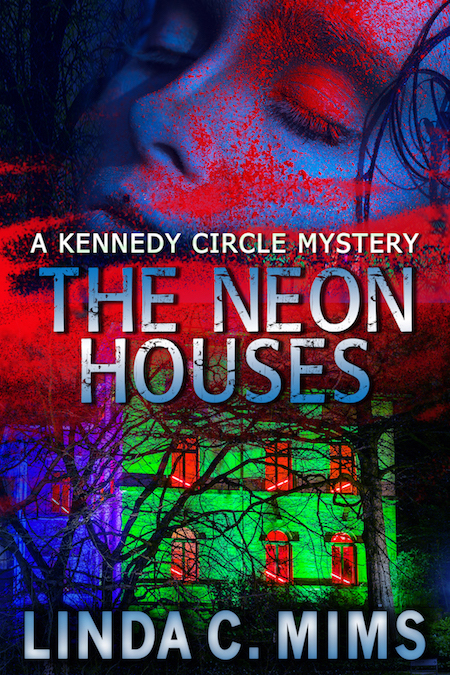 Dr. Noel Kennedy hears screams inside her head, but the screams aren’t hers. While preparing for her annual end-of-summer barbecue, Noel hears her young friend—twenty-year-old Zarah Fisher—screaming for her life. However, Zarah is miles away!
Noel knows the exact moment Zarah takes her last breath because Noel has a secret! It’s a secret that not even her husband Richard knows.
As the Deputy Chief of Schools of Gang Territory, Noel has perfected her life. She is a solid, middle-class citizen from New Chicago, Incorporated. New Chicago and Gang Territory have become vastly different societies since the early Urban Wars. Now, the year 2087 finds New Chicago’s military-trained police determined to enforce laws that keep “gang people” out.
Harlem Pierce, a New Chicago police detective, has been warned to stay away from this case and he urges Noel to let it go. But a new killing involves Noel’s younger cousin and her boyfriend and links Noel to it in a startling way.
Who can Noel draw on? Must she turn to Warren Simpson—the menacing, treacherous boss of Gang Territory? Or … could he be the killer?

“The tour sponsored by 4WillsPublishing.wordpress.com.”