Normally we would have a little story about Bailey, Lucy, and Twiggy but as you know it is hard for me to get photos and do PT at the same time. I am so pleased to have Staci Troilo as a guest to give you some more information about her new book Tortured Soul. Thank you, Staci for appearing on Fiction Favories.

Hi, John. Thank you for offering to host me here today. I know you write thrillers, so I thought your readers might be interested in one of the many action-packed scenes in my latest release, Tortured Soul, the fourth and final book of the Medici Protectorate series. And here it is: 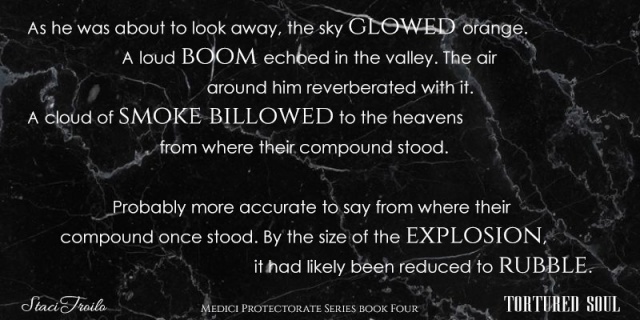 Coz gave Toni’s hand a reassuring squeeze, promised he’d hurry back, then joined his brothers to do a sweep of the property. He took one last glance up the hill toward the villa they’d just vacated. Their group had more than doubled since they’d arrived in Italy, yet that compound had housed them all comfortably. Hopefully, the next place would be as accommodating.

As he was about to look away, the sky glowed orange. A loud boom echoed in the valley. The air around him reverberated with it. A cloud of smoke billowed to the heavens from where their compound stood.

Probably more accurate to say from where their compound once stood. By the size of the explosion, it had likely been reduced to rubble.

Teresa dashed from the convent, and the Notaro women leapt from their cars. Carmen and his men sprinted over to them.

“Was that—?” Toni’s eyes were wide, her face pale, noticeable even in the darkness.

“The compound,” Coz confirmed. He didn’t understand how the blast had happened. They’d only just left. Surely they would have seen approaching traffic on the road or a drone overhead.

“Oh, my God.” Teresa made the sign of the cross.

“Mike. And Rico.” Toni grabbed Coz’s arm. “Do you think they got out?”

What could he possibly say to reassure her? The odds of Mike and Rico fighting off an attack on their own and escaping unscathed were slim.

He didn’t want to think about it.

By the strangled sound Toni made, she’d arrived at the same conclusion.

There you have it. The story pretty much starts with a literal bang and the action only ramps up from there. I put all these characters through hell before the end… and I can’t guarantee everyone makes it out alive.

Protection is safety. Until it stifles.

After months of clandestine battles, the Brothers of the Medici Protectorate finally know who is responsible for the assassination attempts on the Notaro family, the secret descendants of the Medici line. And they’ve never faced such a formidable foe.

Roberto Cozza–Coz–faces this new reality with surprising pragmatism. His powers may make the difference in winning their covert war–if only he can master them in time. It would just be so much easier if he could get his emotions under control, but neither his Brothers nor their charges are making things easy on him.

Toni Notaro appreciates the security provided by the Brothers, but she knows she has her own role to play–and it terrifies her. She is the missing link in Coz mastering his emerging abilities, yet she struggles to bridge the gap between what he needs and what she can offer.

As the Brotherhood hurtles inexorably toward the climactic final showdown, Coz and Toni must find the strength within themselves and each other to master the secrets of his powers, or risk death and defeat for all they hold dear.

Staci Troilo writes because she has hundreds of stories in her head. She publishes because people told her she should share them. She’s a multi-genre author whose love for writing is only surpassed by her love for family and friends, and that relationship-centric focus is featured in her work.