Welcome to Gwen Plano and Her Latest Book, The Culmination, a new beginning.

Thank you, John, for inviting me to your blog to help launch The Culmination, a new beginning. The book is now public on Amazon, and I’m super excited. To celebrate, the Kindle edition is on sale at 99¢ through December.

So, what’s the book about? The Culmination can best be described as a military thriller. It tackles difficult topics such as denuclearization, the power struggles over oil in the Middle East, as well as the ever-present danger of war. Readers will find themselves sitting with the Joint Chiefs of Staff, walking in the historic Red Square, and laughing with children in an orphanage in Turkey. They will glimpse the horror of war and watch the give and take of a negotiated peace. Readers will also meet the two heads of state who fall in love and subsequently commit themselves to creating a world in which all are family.

I never expected to write this book, but in some ways, I had no choice. The characters crowded into my office and insisted that I listen to them. In a very real way, they wrote the book. I simply tapped the keys and learned of the urgent need to become family.

The Culmination, a new beginning is the third book in The Contract thriller series. After an assassination attempt on an Air Force base in northern California, tensions mount. Heads of state meet to craft a denuclearization agreement. The meetings between these nuclear powers take a murderous turn. A nefarious conspiracy re-emerges and leads the characters into the heart of the Middle East, where they encounter the unexpected and find a reason for hope.

The leaders from the nine countries with nuclear arsenals gather in Santa Fe, New Mexico to check on the U.S.’s disarmament progress. This is the team’s first visit to any of the sites. Vice President Margaret Adler from the United States proudly leads the team to the nuclear weapons complex.

While storm-clouds gather, the leaders from the nuclear nations board an armored military transport and travel to the visitation site, the Kirtland Air Force Base Nuclear Weapons Complex in Albuquerque. An Air Force engineer greets them and explains how the investigation will proceed. He describes the disarmament process and points out the care that is taken for storing the disarmed warheads. Vice President Margaret Adler stands to his side and listens intently as he discloses the intricate steps required. The engineer then leads the team to a viewing room, where members can look out upon the collection of deactivated warheads.

After the technical questions get answered, the team returns to the hotel. They proceed to the conference room to discuss their experience and plan for the next steps. If they’d expected a leisurely working-lunch, events soon disabuse them of that notion. As the attendees take their seats, a scuffle breaks out among the Chinese delegation. A member of their team points a semi-automatic weapon at his President and yells, “Zhang subverts Mao’s principles and lives by his own!” Then he shouts something in Chinese and opens fire.

The Chinese President falls to the ground. Screams erupt and chairs topple as people scramble out of the way of the assassin. Several rush to the door in a panic. Chaos ensues.

Stunned, Margaret stands and stares, mouth agape, and heart thumping. The shooter points the weapon directly at the Vice President. “This charade will end today.”

Margaret keeps her eyes on the assailant and edges away from the group. Those still seated take cover beneath the table, and those standing take a few steps back. TV crews capture everything. Though nauseous from fear, Margaret confronts the man in quiet tones, “Sir, this is not the way to handle a disagreement. Innocent people surround you. Move to the open area, as I have done.”

Russia’s President Smirnov hurries forward and steps in front of Margaret. Meanwhile, soldiers work their way through the crowd and hold their assault weapons drawn on their target. Smirnov tries to talk the militant shooter into laying down his gun, but he will have nothing to do with the President’s directive. Instead, he aims and fires upon him. Immediately, a barrage of automatic shots discharges and kills the assailant.

Margaret can’t help but scream. She covers her mouth with her hand and blinks in shock. Time seems to stand still, and then the roar of pandemonium and fear hits her. At last, she finds that she can move and reaches to help Smirnov.

His son Ivan rushes to his side. Hit in the chest, Smirnov bleeds profusely. He coughs blood and struggles to breathe. He tries to speak, but words fail to emerge. Ivan cradles his father’s head. “I love you.”

With tears pouring down her face, Margaret holds Smirnov’s hand. An Air Force medical team dashes into the room and to the downed President’s side. Smirnov’s eyes are barely open, but he looks at Ivan and then Margaret and sputters one audible word—family. His eyes close. The Russian President takes his final breath.

Overcome by sorrow, Margaret chokes back her tears. As though in a dream, she stands. Smirnov’s blood covers her hands and suit. She summons strength and raises her voice, “We have just beheld the courage of a true leader. He has made the ultimate sacrifice.” 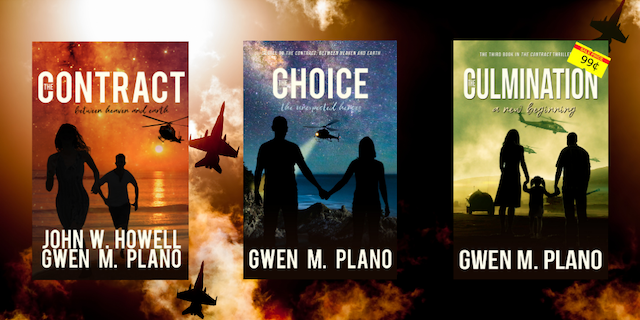 The Contract between heaven and earth – https://amzn.to/2U2Lgmv

The Choice: the unexpected heroes – https://amzn.to/3lcz8eA

The Culmination, a new beginning – https://amzn.to/3eEWkj9