“Using this photo (below) as inspiration, write a short story, flash fiction, scene, poem; anything, really; even just a caption for the photograph. Either put it (or a link to it) in a comment or email it to me at keithchanning@gmail.com before 6pm next Sunday (if you aren’t sure what the time is where I live, this link will tell you). If you post it on your own blog or site, a link to this page would be appreciated, but please do also mention it in a comment here.

Go on. You know you want to. Let your creativity and imagination soar. I shall display the entries next Monday.” 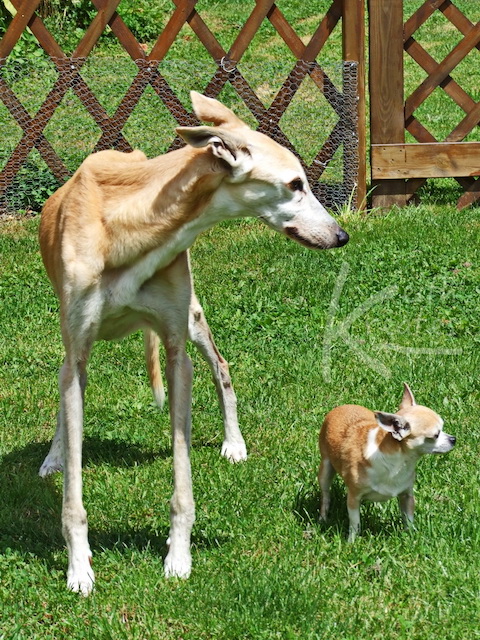 “I almost missed it. What was that anyway.”

“You sure there is such a thing.”

“You can,, for sure. You’re built for running. I’m a little too close to the road.”

“Yeah, for maybe ten seconds. That sucker is still running.”

“You don’t think he lives with someone who feeds him, do you?”

“All I can say is his posture right now is the way I would act at the sound of the falling kibble.”

“I thought I heard the subtle sound of the kibble bag being opened.”

“You are too near the Earth. Sounds go right over your head. Listen.”

“It the thundering paws of that thing. it’s coming back.”

“You’re right. Maybe we can stop it.”

“Not me. Participating in a stampede is not my idea of fun. So you go right ahead.”

“GOT ERRANDS TO RUN.”

“WHAT ARE YOU ANYWAY?”

“I know, right. I thought those things were out in the wild.”

“We better be careful. I hear they carry rabies.”

“Did you say something about kibble before?”

“Let’s go sit on the porch with sad eyes. Maybe that will make it happen.”

“Great idea. You know for a short one you are pretty sharp.”

“Since when is short stupid?”

“You know what I mean. Some of my best friends are short.”