I am delighted to welcome Craig Boyack to my blog. Craig is a highly creative and talented writer. He can create stories out of totally fictional situations and character types. The hallmark of his books is the reader will find unusual circumstances wrapped in a plausible yet outrageous story and served up with humor and excitement. Craig has written a four-book series that is called The Hat series. I have read The Hat and Viral Blues. In addition, I have Mrs. Malony and Lunar Boogie on my Kindle. I wondered why I haven’t read them yet but put it down to a large TBR pile. I think I’ll move them up.

Craig and I have known each other for a while, and we are both members of the Story Empire crew. I looked up the first time Craig visited my blog, and it was October 2015. He was promoting his book titled Will ‘O Wisp. (You should get that one, too.). Enough of my blather. Here’s Craig to tell us about what he is planning. Oh yes. My regular post is delayed for two hours to give Craig some breathing room for his message.

Thanks for having me back, John. I’m trying something different this month. I’ve never had a series to promote before, and with four volumes now, it seems like The Hat Series qualifies. There are four weeks this month, so I’m talking about a volume per week. 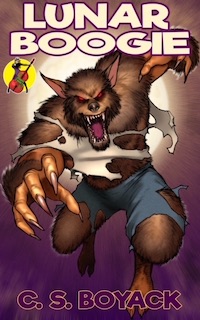 There’s a blurb down below that covers the whole series for now. This week’s title is Lunar Boogie. This is the newest volume of the series, but your readers shouldn’t worry about that. Each volume is capable of standing alone, and it’s as good an entry point into the series as any other.

Lizzie and the hat form a symbiotic relationship that allows them to do more than either of them could accomplish alone. This allows them to form a small cover band to make a living, and to fight monsters at night. This time they’re on the trail of a werewolf.

The werewolf really is one of the most tragic monsters, because the human has no idea what he/she does a couple of nights per month. Because it’s more animalistic, getting the wolf to come to one of their musical events isn’t likely to happen.

This puts Lizzie and the hat into some dark and dangerous corners of the city. The police think they’re chasing a serial killer, so some effort has to go into keeping them alive and not getting arrested at the same time. Getting the werewolf to stalk Lizzie might be a better solution than wandering around and trying to find it.

There is an urban legend that keeps growing around their adventures. The creature known as Hellpox doesn’t exist, but gets credit for everything our heroes do. The legend grows via a program called Night Bump Radio. It adds a fun dimension to the tales in an era when everyone has a cell phone and even some intersections have cameras.

This series has Halloween written all over it, and it’s October. It’s designed to be dark humor, and shorter novels for quick, fun reading. If you think chasing a werewolf is what Halloween is all about, this might be the story for you.

Universal link for the series: http://mybook.to/The-Hat-Series

Blurb: The Hat Series is my opportunity to have a little fun, and readers seem to be enjoying themselves, too. The series fits into a variety of pigeonholes as all stories do. If you’re looking for supernatural, paranormal, or urban fantasy, with a dose of dark humor, this might be the series you’re looking for.

Lizzie St. Laurent is a hard-working twenty-something. She’s struggling with the issues of being a young adult, but also dealing with the supernatural world. After her grandmother died, she tried to get a memento from the estate. Her greedy uncle refused to share, so in desperation, she stole a box from the moving van.

Her treasure turned out to be an old hat that belonged to her grandfather. Not exactly the knickknack she was hoping for. This isn’t any ordinary hat. He’s actually a being from another dimension who was brought here by witchcraft. He has a few magical skills, but also some more ordinary ones. He can transport her to a cabin, deep in the forest, among other things. A bit more ordinary is his ability to play the upright bass, but only if he has a human host to manipulate. He’s also a shapeshifter, but is limited to always being a hat of some kind.

The hat has been in Lizzie’s family for centuries, and all of his partners have been monster hunters. Their symbiotic relationship also created an additional income stream for Lizzie. They formed a small cover band, which tends to get them out at night when monster hunting is more productive.

I put all kinds of strange things into these stories to make them fun. My section breaks have all been replaced with a series of bass clefs. I also include silly graphics in various locations to enhance the tales. You’ll find tons of snark mixed in with your blood and adventure.

These are short novels, designed for a single afternoon. While it is a series, they can be read as stand-alone tales. If one of the other volumes is your entry-point, I don’t think you’ll feel lost.

If this sounds like something to make your October complete, I’d appreciate you checking it out.

Thank you Craig for making the trip to Texas. I wish you much success with your promotion. Now here is a little about Craig and where you can find him