Laurie Bell who is a terrific author, did a super review on His Revenge. A visit to her blog will reward you with some really good writing and reviews. 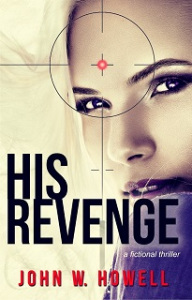 There is no way out as John Cannon either becomes a traitor to America or causes thousands of innocent people to die if he refuses to co-operate.  America loves John Cannon, its newest hero, and the President wants to present him with the highest civilian medal for bravery for saving the Annapolis midshipman from a terrorist plot to destroy them. While in Washington for the award ceremony, John unwillingly becomes an accomplice in another plan by the same group to attack the credibility of the US President and the stability of the worldwide oil market.

The second John J Cannon Thriller moves from a barrier Island off the coast of Texas to Washington DC, then to Northern California, and finally to Ecuador. John is on the receiving end of an offer he cannot refuse. His avowed enemy Matt Jacobs now wants…