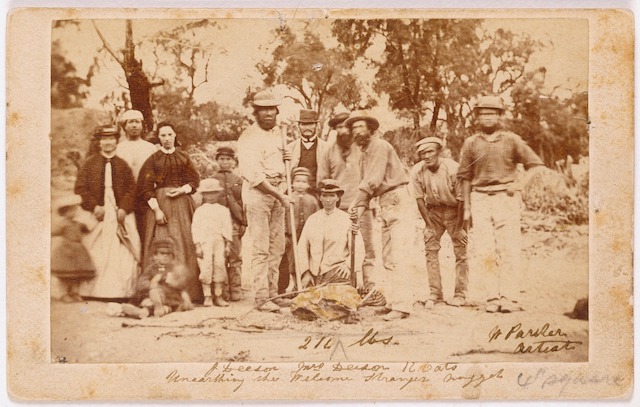 This week marks the anniversary of the discovery of gold in the Yukon territory in Canada in 1896. This was the last big gold strike in North America. We don’t want to miss out on the opportunity. As always, we need to take the list to ensure we don’t make any errors that could cause a time continuum tear. Grab the list and a canteen, and we’ll be off.

10 If you go, do not buy one of those mining kits called “Yukon Outfits” that are being sold everywhere. If you do, at best, maybe something will come in handy. At worst, you will have spent a pretty penny on useless equipment. (Oh look, Malachi. You have a can of beans in that kit. It might be nice to have a can opener.)

9 If you go, do not cross that line in the sand drawn by Tiny, the WWF champ. If you do, at best, you’ll have a gift for Tiny. At worst, Tiny will assume you are trying to jump his claim. (The big problem with Tiny, Mika is his inability to restrain himself once he gets agitated. Sure, you can try to talk him out of tossing you into the bottomless ravine, but history says you won’t be successful. Oh look, I think you made Tiny smile. Nope, just gas.)

8 If you go, do not think you are the only one going. If you do, at best, you may find an unclaimed spot. At worst, you’ll get there and have nowhere to mine for gold. (You see, Milan. Once the word got out, over 50,000 miners converged on the scene in the first two years. There was minimal unclaimed land)

7 If you go, do not ask the young miner Jack London how his mining is going. If you do, at best, he will think you are talking to someone else. At worst, he’ll try to sell you his claim. (Jack London was 21 and not very successful as a miner, Monte. He did write his first book in 1900. It was a collection of short stories about his mining experiences titled  The Son of Wolf. You should have gotten his autograph.)

6 If you go, do not ask George Carmack how his claim is doing. If you do, at best he won’t answer. At worst, he will pull out his .44 and ask you why you want to know. (You should know Merrick that George Carmack, along with his brother in law Skookum Jim and nephew Tagish Charlie was the guy who went salmon fishing in the Yukon and first discovered nuggets of gold. He eventually pulled out over a million dollars worth. Which today would be worth $30,000,000.)

5 If you go, don’t tell anyone that you think the gold may run out. If you do, at best they won’t believe you. At worst, you might cause a panic among the miners. (In fact, Mac. several miners sold their claims to mining companies who continued to mine for gold as late as 1966. Today there are still 200 small mines operating in the area.)

4 If you go, do not forget your warm clothes. If you do, at best you can borrow some. At worst, no one will loan you anything, and it is 60 degrees below zero. (I would say you need to pull that lever marked “home,” MacGillivray. If not you are going to freeze to death.)

3 If you go by boat like most and land at Skagway Alaska, do not think you can ride to the goldfields. If you do, At best someone will set you straight. At worst, you won’t realize that it is a 550-mile walk. (Also, the Canadian government won’t let you cross the border without at least 2000 pounds of supplies. So here you are Machau. You need to figure out how to lug 2000 pounds and walk 550 miles before you can even look for gold. I think it is time to head home since the store seems to be out of mules right now.)

2 If you go, do not believe Nikola Tesla that his x-ray machine will find gold without digging. If you do, at best you still won’t buy it. At worst, you will purchase the device. (As could be expected Mackinley, the machine proved worthless unless the gold was sitting on top of the ground. Obviously, if it was on top of the ground, you wouldn’t need the machine. Now go ask Nick for your money back.)

1 If you go, do not think you are going to get rich. If you do, at best you won’t lose all the money you have. At worst, you’ll be one of those who sold everything they had to go gold mining and lost it all. (It may surprise you to know, MacLaren that of the 100,000 men who headed for the Yukon, only 50,000 made it to the goldfields. Out of that number, only 4000 actually found gold. Even so, the amount of gold discovered was over a billion dollars worth in today’s value.)