Today’s good news story comes from Boyd’s Land of 10,000 Stories. Here it is without edit.

A 15-year-old decided his town needed a veterans memorial. He raised $77,000 and built one

OLIVIA, Minn. — When a 15-year-old boy came to the Olivia City Council with plans to build his hometown a veterans memorial, Mayor Jon Hawkinson wondered if the lad had bitten off more than he could chew.

Yet, there was something about Dominique Claseman.

“He had architect drawings, he had the space picked out,” the mayor recalls.

And perhaps most importantly, “He knew there would be people in our community who would want to donate to something like this,” the mayor recalls.

On Memorial Day, several hundred people gathered for the dedication of Olivia’s new veterans memorial, completed by Dominique as his Eagle Scout project a few weeks before his 17th birthday. 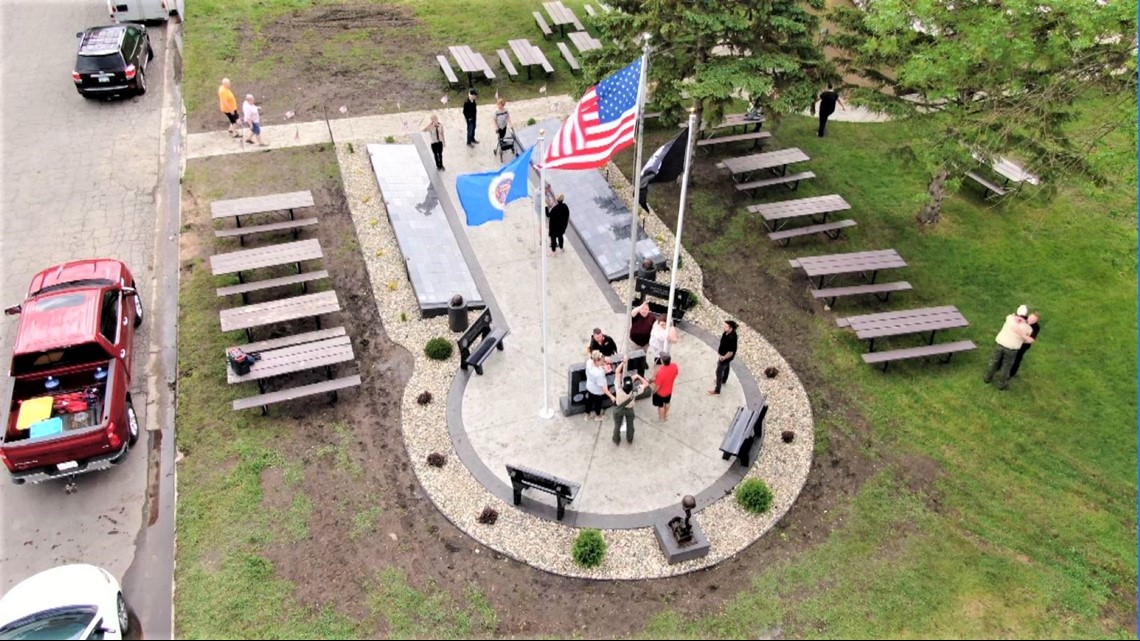 Ron Kopacek, who headed up the dedication’s honor guard, was amazed as anyone that Dominique pulled it off. “Fifteen years old, sophomore in high school, he’s going to raise $12,000 to $15,000 we’re thinking, ‘What? Really?’”

“I question myself on how I even did it sometimes,” Dominque says with a smile.

Dominique hung flyers in businesses, did interviews with the local newspaper and radio station, and set up a table to pitch his project during events at the Olivia American Legion. 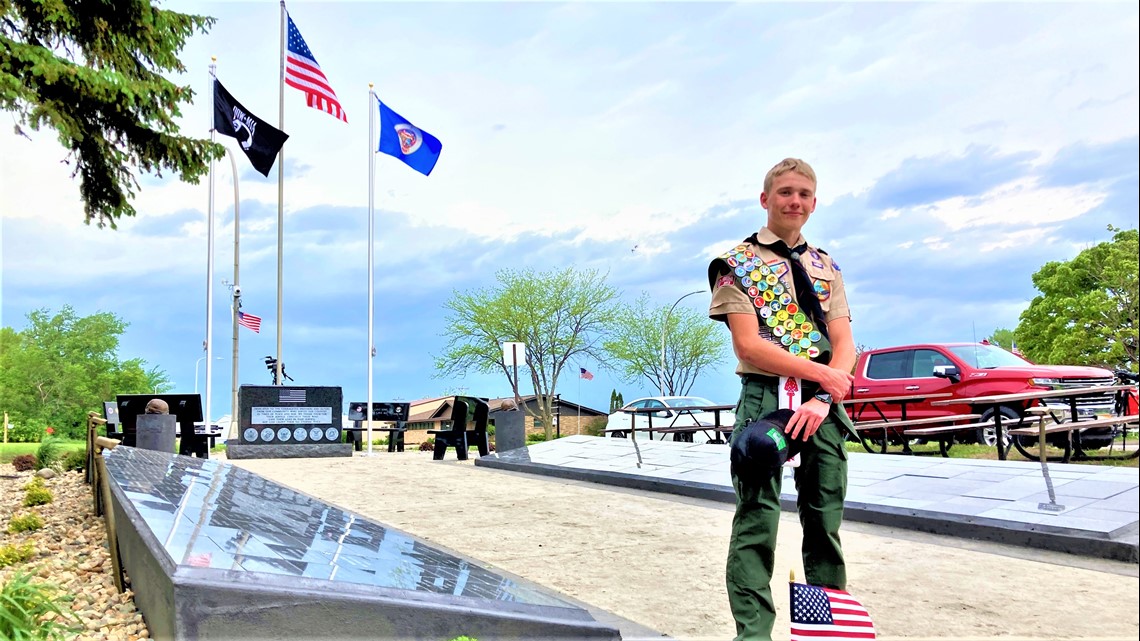 As purchases of engraved pavers and other donations exceeded Dominique’s expectations, he expanded his vision of what the memorial could be.

“I wanted to show more appreciation in a bigger way,” says Dominique, who comes from a long line of men who served their country. Among them: Dominique’s father, who wore his Iraq combat boots, at Dominique’s request, to leave 21 foot prints in the memorial’s wet cement.

Mark Jurgensen, who serves as a Boy Scout scoutmaster, isn’t surprised his son saw the project through to its grand conclusion.

“He’s one of them kind of kids that likes to make sure that he doesn’t disappoint anybody, and he strives really hard for that,” Mark says.

On dedication day, a stream of people walked through the memorial, reading the 280 pavers engraved with the names of men and women with Olivia ties who served in the military, some who gave their lives for their country. 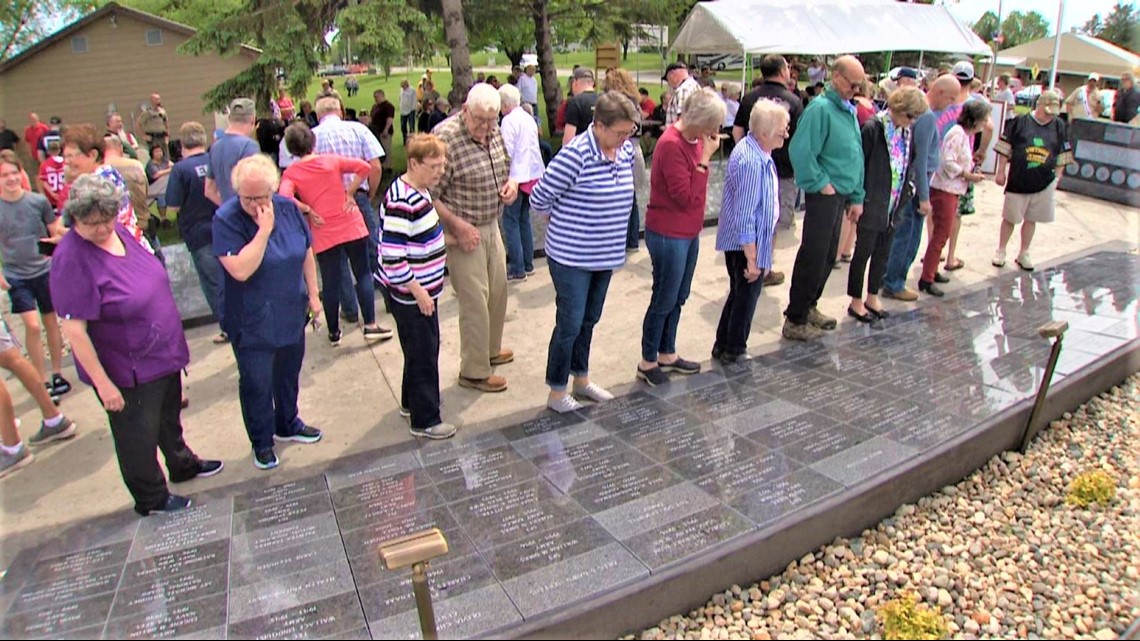 The U.S. flag, the Minnesota flag, and the POW flag fluttered over the honored names, a central headstone, black granite benches and bronze statues.

Off to one side of the memorial, Kim Wertish hugged Dominique tightly. “Thank you,” she told him.

Kim’s son James was killed in Iraq on July 16, 2009, with two other members of the Minnesota National Guard, Carlos Wilcox and Dan Drevnick, whose names are also etched in the memorial.

“James has been honored in many cities through connections with the military, and that’s dear to us also, but this is our hometown,” Kim says.

Dominque also has a knack for raising money. 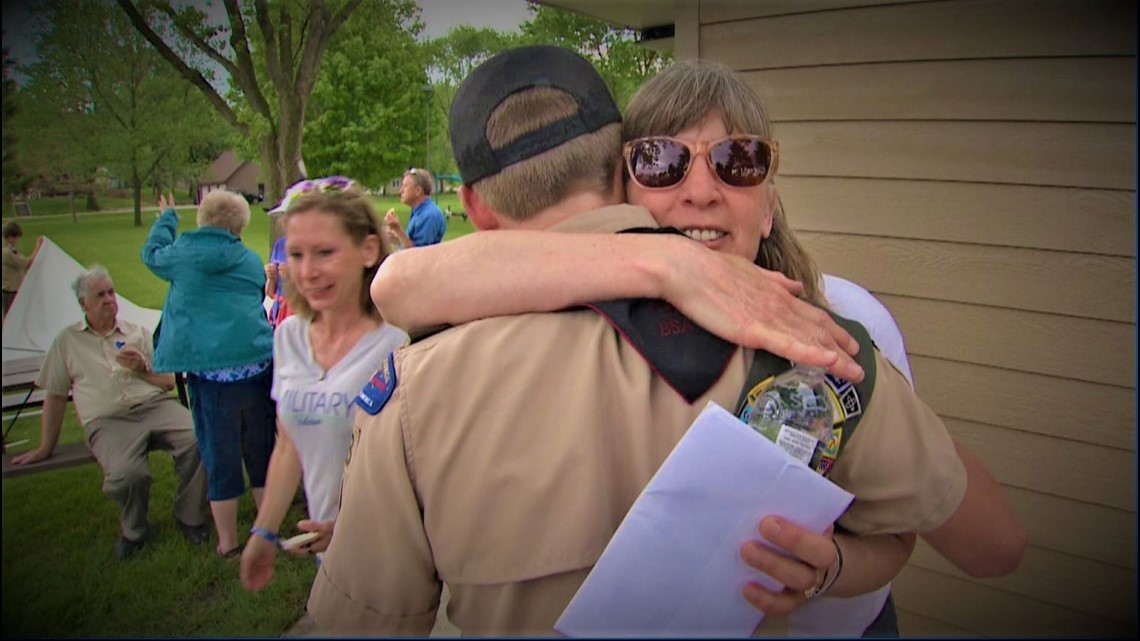 “This is something special,” says Aaron Russell, a district executive with the Boy Scouts of America. “We were trying to figure out if there’s been in recent memory a project of this scale, especially with the money raised. We couldn’t think or find anything even close to it.”

The memorial is in Olivia’s Kubesh Park, near the intersection of U.S. Highways 71 and 212.

In early May, Dominique dug a shovel of dirt in a ceremonial groundbreaking, before turning the job over to the contractors he hired.

Dominique hopes his two younger brothers will one day expand the memorial for their own Eagle Scout projects. 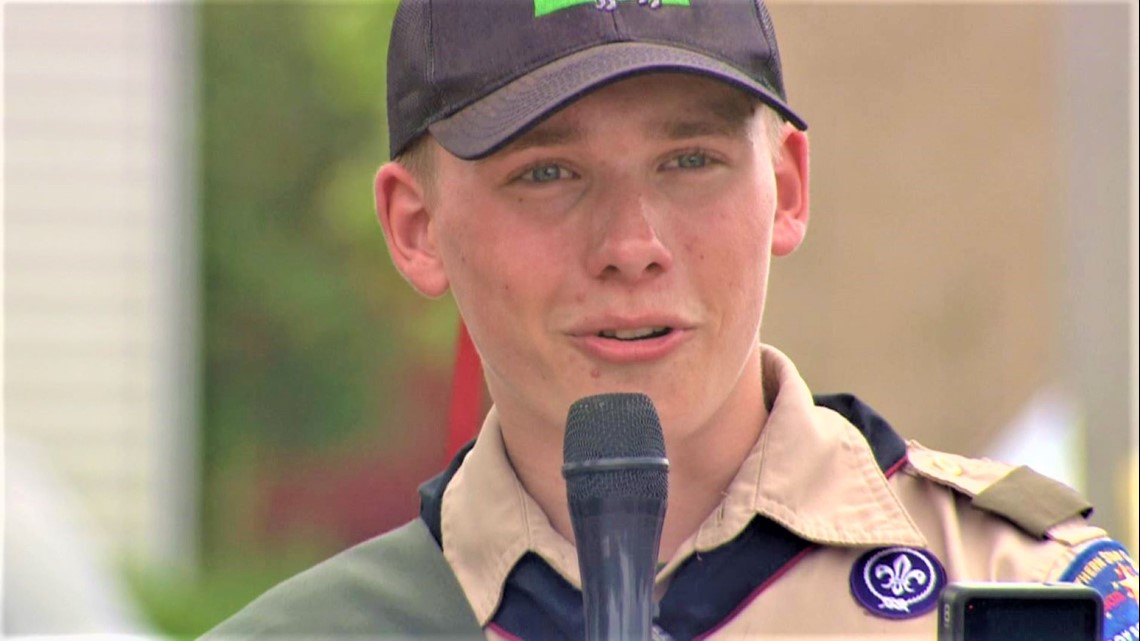 Credit: Devin Krinke, KARE 11
Dominique Claseman addresses the crowd at the dedication of the Oliva veterans memorial he built

Dominique was among the speakers at the dedication.

“The memorial before you is the result of the generosity and support that I, and the veterans of community, have received,” Dominique told the assembled crowd.

Mark Hebig drove two hours to attend the ceremony. His father, Alfred Hebig, served in Korea and is listed on one of the pavers.

“I never knew him very good because he was killed in a car accident when I was 1 year old,” Hebig said, holding back tears. “It’s been a long time, but you still always remember.” 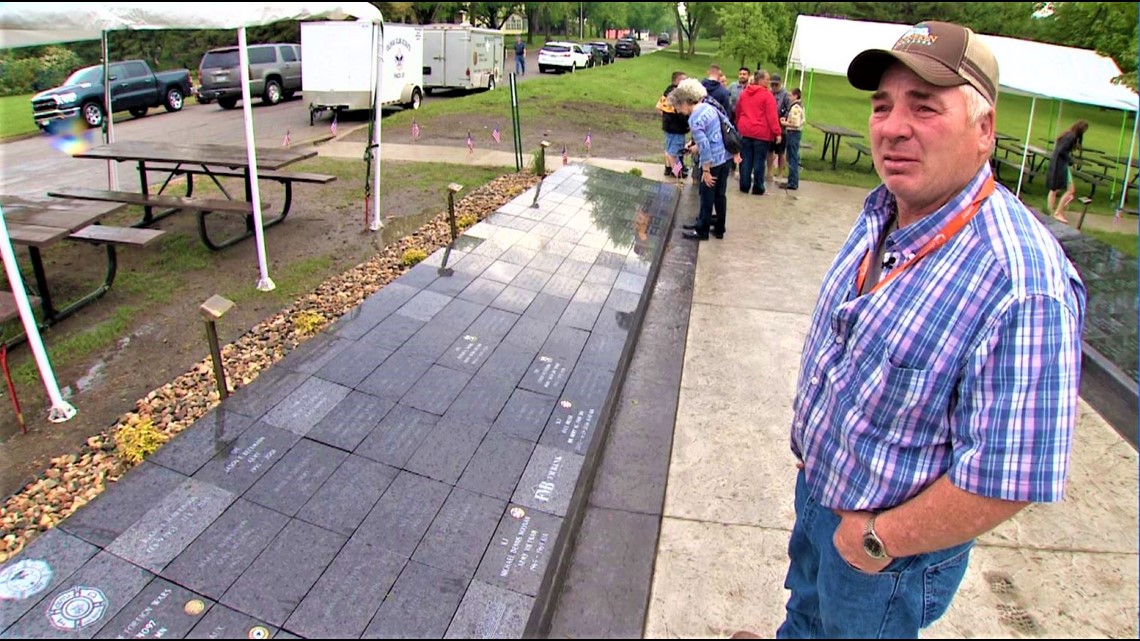 Credit: Devin Krinke, KARE 11
Mark Hebig drove two hours to see his father’s stone at the Olivia veterans memorial
The good news here is that one person made a difference for so many. Today’s JohnKu talks about making a difference. I hope you have a beautiful weekend
Dominoes by John W. Howell © 2022
One good deed can trip,
A reaction of good deeds. . .
That could span the world.