My Interview with Sacha Black

I am very pleased to be interviewed today by Sacha Black at her place.

They say night owls stay up late. But in the depths of midnight, Sacha isn’t just awake. She’s hunting. A nightwalker carefully treading the line between light and dark, strange and unusual. A hunter desperately pursuing the right words to chronicle the tales of The Netherworld.

Keepers, the first in the Fallon trilogy which is set in The Netherworld, is currently boiling in the cauldron of her mind, the first draft of Keepers is almost finished.

Sacha was always meant to write, she was the girl who spent her lunch break tucked away in the corner of the school library, head buried in a pile of books pencil in hand, weaving stories onto the page. But she grew up, stumbled and fell forgetting her dream. She spent a while lost in a dark and twisted place. Then, one day she sat in front of her laptop and started to write. She remembered that all she’d ever wanted to do was write stories in far away places filled with curious creatures and magical happenings. Characters started to talk to her, fill her brain with incessant chatter and demanded their stories be told. And so, The Netherworld was created, and Eden’s story began.

Sacha is a wanderer at heart. A thinker, and ponderer on anything unusual or controversial which you can see in her Weekend Wonders series. She finds inspiration in the beauty of imperfection and is enthralled by evocative questions.

She’s loud, but it’s mostly a mask, preferring instead to take sanctuary through travelling the world, particularly New York or Asia having spent time in Nepal and the Himalayas Trekking up to Everest Base Camp. But she also finds peace through shoving her nose deep in a book, through haunting songs or a filthy dirty base beat!

Sacha has a fascination with writing, but particularly with deconstructing the writing process. She shares the trials, tribulations and lessons she learns trying to write the stories of the Netherworld and eventually become a published author.

Sacha is also a mother to a toddler and wife to a beautiful woman. When she’s not writing, she can be found working in the public sector, doing gel nails or occasionally baking cupcakes. 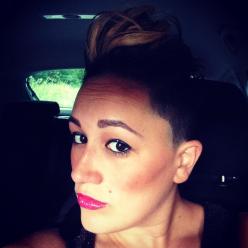 You can also find her here:

Give her a visit. She is someone you should know and follow