Views of the Neighborhood – The Eight Wonders of Port Aransas

Of all the treasures in Port Aransas, the Museum has selected eight which have been labeled The Eight Wonders of Port Aransas. I thought it would be fun to take a look at what the museum considers the eight wonders.

Number one is the Lighthouse. Construction started in 1854, and the first light went on in 1857. The beacon could be seen as far out as seven miles into the Gulf. It was an operational lighthouse for Ninety -nine years before decommissioning. (photo courtesy of The Port Aransas Museum)

Number two is the jetties. There are two and were built to stop the erosion of the ship channel. Work was begun in 1862, but it was not until 1910 that the jetties were constructed finally strong enough to withstand the sea force.

The third is the Tarpon Inn. So named after a popular gamefish that is now extinct from the Port Aransas waters. The hotel was built in 1886 just when it was clear that the jetties would be successful in protecting the ship channel from deterioration. The channel meant new visitors and new business opportunity. 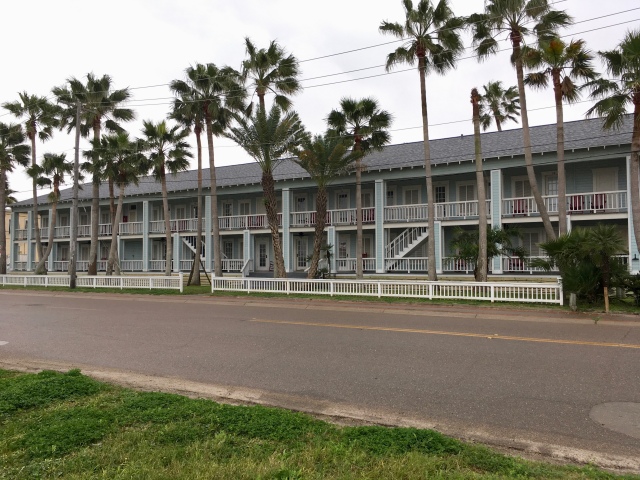 The fourth wonder is the University of Texas Marine Science Institute. Established in 1941 the institute has educated thousands of scientists on how to move marine science forward. Here is a picture of the educational center.

The fifth is the Port Aransas Museum. It is housed in a building that was initially a “kit ” home built in 1914. It has been moved three times around the island. It served as the life-saving station from 1916 to 1925 and then a private residence for seventy-seven years until donated to the museum.

The sixth is the Farley Boat Works. Founded in 1915 the works made boats that could withstand the heavy surf around Port Aransas. They were used primarily as fishing boats. The works continued to make boats until 1970. In 2011 the Farley Boat Works began making crafts once again.

The seventh is the Chapel in the Dunes. It is atop the highest dune in Port Aransas. It was built in 1937 to serve as a devotional place for the Carter family. It also became the center for ice cream socials for the children of Port Aransas held by Arline Carter know as the “Angel Lady.”

The eighth wonder is the Last Farley Boat. The last boat to leave the boat works. It was a finished hull bought by James Mayfield a local shrimper. He was going to have the shell made into a new shrimp boat. He never got around to it and instead inverted the hull to form a roof on his shop.