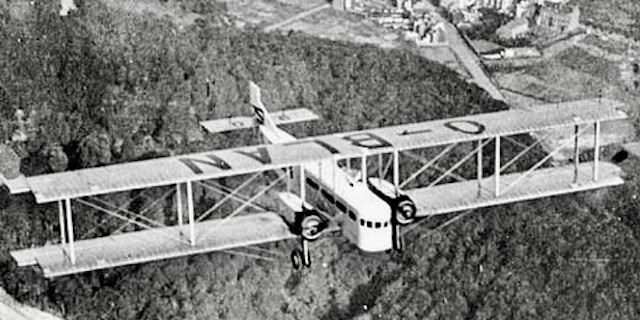 This week marks the occasion of the first international airline service inaugurated on a weekly schedule between Paris and Brussels. The service was established by Lignes Farman. If you want to be part of this historic occasion, don’t forget to take your list so you can avoid some of the pitfalls of time travel.

10 If you take a flight, do not think you can get first-class treatment. If you do, at best you’ll be lucky to get a seat. At worse, you’ll be freezing and caught in many cross drafts. (You see, Knox the first plane used was a Farman F60 Goliath which was built as a bomber. Your seat is wicker and, you should have read the instructions about dressing warmly. Yeah, that’s your breath you see in the unheated cabin.)

9 If you take a flight, do not ask Tiny the WWF champ and your steward today for anything. If you do, at best, he will tell you to sit down and buckle your belt. At worst, he just found out he is being replaced by a female. (It looks like Tiny is going to show you how it feels to skydive, Kade. Don’t forget to ask to borrow Tiny’s parachute. It’s worth a try.)

8 If you take a flight, do not ask “are we there yet.” if you do, at best, no one will answer you. At worst, the pilot will walk back and explain the realities of air travel in 1919. (The next question is “Who is flying this thing,” Kenan. With the pilot standing there giving you arrival information, you may wonder. Breathe easy buckaroo the first autopilot was invented in 1914 by the Sperry Corporation. Of course, we don’t know if this plane has one.)

6 If you take the flight, don’t ask about the customs declaration process. If you do, at best you’ll get a funny look. At worst, someone will think you are a member of the treasury department. (Since customs for international flights were not established for the first two flights, Kadar, whoever you asked, is now opening the cabin door. I think I would worry since the plane hasn’t landed yet.)

5 If you take the flight, do not expect meal service. If you do at best you’ll be hungry when you land. At worst, since the plane has lightly structured wings, it is susceptible to turbulence. (Can you just see it, Kaelan, you’ve just wolfed down a baguet with Fois Gras, and you hit an air pocket.? You and your Fois Gras will be reunited after a 500 foot fall. Hot meals were started in 1936 and sandwiches in October of 1919.)

4 If you take the flight, do not let the crew talk you into a high altitude record. If you do at best, you may get to 20,000 feet which was done in a Farman F60 later in the year. At worst, no one understood that the oxygen starts to thin at 10,000 feet. (So here you are, Kaemon, having all kinds of fun setting a record and meanwhile, your pilot passes out from the lack of oxygen. Yes that screaming you hear is you.)

3 If you take the flight and are a white knuckle flyer, do not grab the back of the seat in front of you. If you do, at best it is well bolted to the floor. At worst, the seat comes loose and you now have the passenger in front of you in your lap. (Don’t worry Kaga. The flight is two hours and fifty-five minutes. Plenty of time to make friends.)

2 If you take the flight, do not grab any of the control wires running through the cabin. If you do at best it is not important. At worst, you’ll grab the main control cable just as the pilot needs it. (Now the left full rudder has bee stopped, Kai. Y’all are headed for a very big mountain. I would suggest letting go of that cable very slowly so the pilot can maintain control.)

1 If you take the flight, do not say anything derogatory about the airplane. If you do, at best no one will hear you. At worst, you’ll be sitting next to Lignes Farman the builder. (You are now invited to go outside and settle the matter like gentlemen, Kaila. Too bad you are still 6000 feet in the air.)