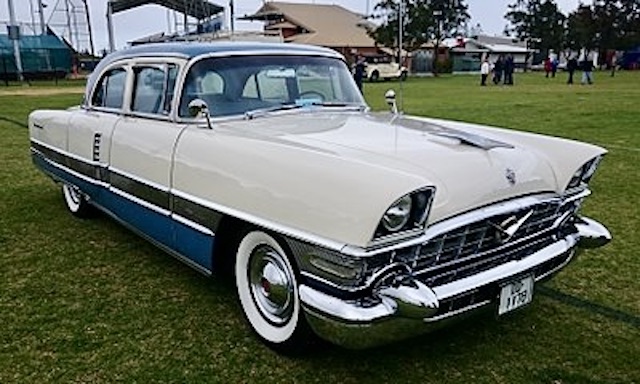 This week marks the anniversary of the production of the last Packard automobile in Detroit, Michigan in 1956. The Packard was, at one time, the hallmark of luxury production cars. The company used the slogan, “Ask a man who owns one,” for many years. Since this is the passing of an icon, it seems only right to go and watch the last machine to roll off the production line.  Take your top ten list so you don’t stumble inadvertently into a situation that could cause a tear in the time continuum. So pack your bag and let’s go.

Top Ten Things Not to Do at the Production of the Last Packard Automobile in 1956.

10 If you go, do not mention the name Cadillac while in the factory. If you do, at best you may not be heard over the noise. At worst, the production crew who have just been told that Cadillac is the reason for shutting the plant will hear you. (Time to try and make them believe you didn’t say Cadillac, Latinus. How about golf? “You know my caddy lacks enough skill to be helpful.” It doesn’t look like it’s working. Hit the fire drill button.)

9 If you go, do not tell Tiny the WWF champ that he missed a spot while polishing the car. If you do, at best, he is thinking of the lunch hour and will ignore you. At worst, Tiny, who just finished being admonished for careless work, will take your comment to heart. (One thing you should know, Lauren, is that Tiny does not take criticism well. In fact, his foreman has been on long term medical leave since he told Tiny to be more careful. Yeah, he’s coming this way. Tine to try out those Nike’s)

8 If you go, do not blow the words to “See You Later Alligator” by Bill Haley and the Comets. If you do, at best the other workers will be singing so loud they won’t notice. At worst, you will be discovered not knowing the words to the number one song. (Not really a big deal, Law, but you can’t make any more mistakes. Better hope you can handle “Blue Suede Shoes” by Elvis. That one is next.)

7 If you go, do not talk about having a McDonalds Big Mac for lunch. If you do, at best, no one will know what you are talking about. At worst, you will draw attention to the fact that you are not from around here. (The first McDonalds opened in Michigan in 1957, Leal. It opened in Lansing, which is eighty miles north. Don’t worry, the workers just think you are weird, not dangerous.)

6 If you go, do not ask if the car comes equipped with a stereo radio. If you do, at best, no one will understand you. At worst, you will be talking to an engineer who will catch the concept and wonder where you came from. (Stereo radios were not installed in cars until 1969. I think that engineer is in love with you, Leandros.)

5 If you go, do not ask for a color wheel to help decide the color of the last vehicle. If you do, at best you will be ignored. At worst, you will sound like you are mocking the final selection. (You see, Leeroy, it has been decided that the last Packard made would be a black Packard Patrician four door. I think those guys with wrenches want to see you. Yeah, I would ignore them too.)

4 If you go, do not scoff at the price tag of $4190 for the loaded Packard Patrician. If you do, at best everyone will think you are rich. At worst, the production crew will think you are saying the car is too cheap. ( You have to remember, Legolas that $4190 in 1956 would be worth $39, 495 today. So the car was far from cheap but not as expensive as some. The production crew would like to see you outside. No, I’m not going with you.)

3 If you go, do not forget some of the plots of the shows that were popular on TV. If you do, at best, the crew will think your memory is shot. At worst they’ll think you are nuts. (so let’s hope you remember I Love Lucy, Gunsmoke, Jack Benny, Alfred Hitchcock Presents, Res Skelton, and You Bey Your Life cause these guys just watched a few last night. No Leighton? That’s too bad.)

2 If you go, Do not tell the workers what is in store for the company. If you do, at best they won’t believe you. At worst they will take out the bad news on you. (The company merged with Studebaker, who was in bigger financial trouble. By 1958 although an attempt was made to produce Packards in South Bend Indiana the brand was totally discontinued. Aren’t you glad you didn’t tell them this, Lemuel.)

1 If you go, do not even think about sitting in the last Packard. If you do, at best no one will be able to find the keys. At worst, you will sit with a spot of grease on your pants. (The shop steward is demanding that you pay for the car Leodegan. I think your Visa card will not be accepted. He doesn’t look like someone who you want to argue with right now. Hit the way back button.)