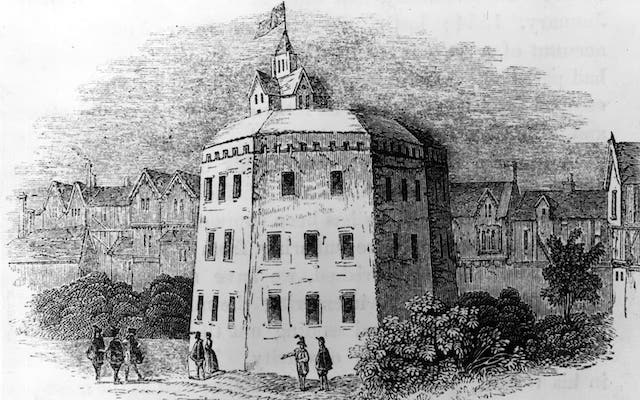 Today marks the 407th anniversary of the burning of the Globe Theater in 1613. If you want to travel back to that time, you better take this list so you won’t inadvertently make a mistake that could cause a tear in the time continuum.

Top Ten Things Not to Do at the Burning of the Globe Theater in 1613.

10 If you go, do not mention that it would not be a significant loss. If you do, at best it will be to someone who doesn’t speak English. At worst, You might be overheard by William Shakespeare himself. (Nice going, Leodegraunce. You wonder why William is so livid? All his plays make their debut at the Globe. Now he will have no venue for performances. Yes, he is getting a pitchfork, and I don’t think he intends to fork hay.)

9 If you go, do not try to tell Tiny the WWF champ how to put out a fire. If you do, at best, he will be too busy to hear you. At worst, Tiny has never been too good at receiving criticism. (You see, Leone. Tiny was left on a doorstep when he was 21, and he hasn’t gotten over the rejection. Oh, I see he is trying a new chokehold on you. Blue is not your color, trust me.)

8 If you go, do not offer to call 911. If you do, at best, you’ll be misunderstood. At worst, Will asks you what 911 is. (As you recognize your mistake Leonidas, Will is getting more agitated as another timber falls into the pyre. Sooner or later he’s going to take it out you. I see him over there with poor Yorick’s skull. He is giving you the stinkeye.)

7 If you go, do not ask if the building was insured. If you do, at best you’ll be talking to an actor who knows nothing. At worst, you’ll mention it to one of the Lord Chamberlin’s Men. (The Lord Chamberlins Men is Willaim Shakespeare’s acting company, Leron. The guy you asked was the one who was supposed to buy insurance but forgot. I think he wants to kill you.)

6 If you go, don’t suggest that maybe plays could be given in the town square. If you do, at best you’ll ask one of the sweepers. At worst, you will ask one of Will’s actors James Burbage. (The actor named James Burbage was the one who had the idea to build a theater in the first place, Lethe. In 1574 the Common Council of London decided to tax performances in public places. So James built his own theater to avoid the tax. When his lease ran out, the timbers from James’s place were used to create the Globe. This was one way to avoid being taxed for using public land for performances. Now James is whispering to Will and there is that look again.)

5 If you go, do not suggest a smaller theater next time. If you do, at best, you’ll make the suggestion to the bartender. At worst, Will will overhear you. (The globe could seat 1000 and have standing room for another 1000, Liander. The folks that stood paid a penny to get in. The people that sat paid 6 pence. Now, if you figure a loaf of bread cost a penny then, On one performance to show you his take, Will could buy 7000 loaves. You think he would want a smaller venue? In fact, he is heading this way looking a little cross.)

4 If you go, do not suggest having hot food at the next theater. If you do, at best, you are talking to a firefighter. At worst, your suggestion of having a flambe duck on the menu will be overheard by Will. (I think you will agree, Lichas, anything connected to fire will cause Will to become unglued. I think he might be ready to toss you out.)

3 If you go, do not suggest that the first play in the new theater be Henry VIII. If you do, at best, the person you are talking to has long stopped listening to you. At worst, you’ll make this suggestion to the producer of the last performance of Henry VIII. (You wonder why he has turned pale, Linc. It was a faulty cannon shot during the production of Henry VIII, which started a fire in the beams and thatching. I think you better get going. He is going to recover very soon and might want to smite you.)

2 If you go, do not tell anyone that a new theater will be built and opened in only a year. If you do, at best you won’t be believed. At worst, Shakespeare will want to know how you came to have that information. (Now you are in a fine kettle of fish, Linden. How are you going to explain your time travel status? I think I would try to convince Will that you are a magician and just disappear.)

1  If you go, do not agree with anyone who calls the theater a den of sin. If you do, at best, Will doesn’t find out. At worst, those folks you agreed with are Puritans. (They have used your opinion as one more vote, Lindsay, and were successful in shutting down the Globe Theater in 1642 along with every other theater in London.)

Tags: author, books, Circumstances of Childhood, fiction favorites, His Revenge, John W. Howell Author, My GRL, Our Justice, Ten Things Not to Do, The Contract with Gwen Plano