It is Friday again, and time to prepare ourselves for the weekend. What better way than to have some good news to get us in the mood for fun.

Our first story is about a boy who cares. 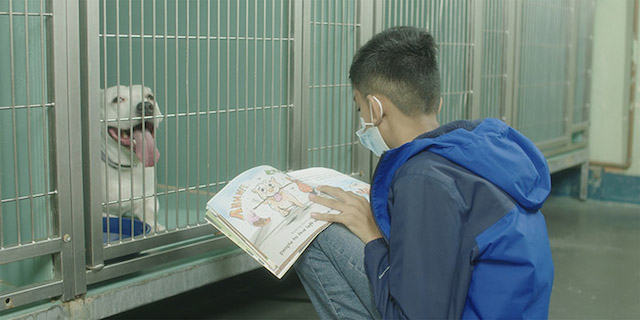 Photo courtesy of the ASPCA

Evan Bisnauth lives in the Bronx with a primary passion for helping socialize adoptable dogs by reading to them regularly.

His favorite story to read to the dogs is “Belly Rubbins for Bubbins,” written by Jason Kraus.

Evan says, “The story is about a dog placed into the shelter and got adopted. I like reading that to the dogs because when I’m done reading the book, I’m like, ‘You will get adopted. Now I have hope for you’.”

The ASPCA announced the recipients of the 2021 Humane Awards, an event to honor people and pets from across the nation who have made outstanding contributions to animal welfare. Evan was named Kid of the Year. The good news here is even the smallest acts of kindness have significant results.

Our second story is about an 80-year-old guy with grit.

Norman Ruff lives in a cottage near Port Carling in Muskoka, Ontario. Norman, an 80-year-old, and his wife Lois were awakened by a Black bear breaking through the kitchen window. The bear spotted Norman and stood up, and roared.

There was a disagreement about house ownership, and Norman punched the bear several times in the nose. The bear, not content to be bullied, slapped Norman several times and grabbed his hand in his mouth.

Finally, Norman managed to open the front door, and the bear eventually found his way out.

Norman was taken to the hospital in Bracebridge, where he became a celebrity among the staff for fighting a bear with his fists. The bear did not require medical attention.

On October 26, 2021, Bracebridge Ontario Provincial Police detachment commander Inspector Burton and Superintendent Houliston presented Norman with an award for bravery. There are no reports on the bear receiving an award as well. The good news here is both the bear and the man lived to meet again.

Today’s John Ku talks about kindness. I hope you have a great weekend.

Kindness is a gift,

That if shared unselfishly . . .

Will come back bigger.