Since my dad was a naval aviator in World War II, I have been interested in all things Navy. I am therefore delighted to have as a guest Robert G. Williscroft, submariner and author of multiple series including The MacMcDowell Missions, The Oort Chronicles, and The Daedalus Files. Robert compiled and edited the true-life adventures of retired US Navy Lt. Commander Jerry Pait in his new book, Sŭbmarine-Ër.

So welcome Robert, who will give us some background on the book.

Thanks, John. So pleased to be here. 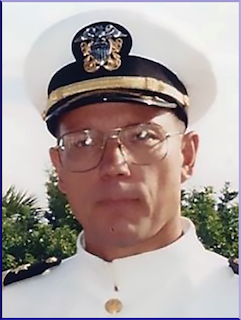 Let me begin with Jerry’s enlistment in the Navy. Jerry Pait enlisted on September 15, 1964, was assigned to Fleet Sonar School, volunteered for subs, and ended up on USS Entemedor (SS-340). After Advanced Sonar School, he was transferred as an STS-2 to USS Von Steuben (SSBN 632B) in the Philly yards right after her collision off Cadiz, Spain. I was a newly minted Lt. j.g., fresh out of Poseidon Missile School, having come through the NESEP (Navy Enlisted Scientific Education Program) and Univ. of Washington in marine and atmosphere physics. I guess the skipper made me Sonar Officer because I was a former sonar tech.” Jerry and I served together until I left for the Man-in-the-Sea Program and ultimately Operation Ivy Bells, tapping into Soviet underwater communications cables in the Sea of Okhotsk.

Jerry went on to become COB (Chief of Boat) on Von Steuben, served in a senior position in Sonar/Torpedoman School, and then was commissioned as an LDO (Limited Duty Officer) Ensign. He returned briefly to Von Steuben and then served as a division officer on several sub tenders. After that, he was assigned to NOTU (Naval Ordinance Test Unit), supervising underwater ballistic missile launchings for several years, working closely with NASA. He rose to Lt. Cmdr., was selected for Cmdr. But was mustered out on retirement as part of Clinton’s force reduction efforts.

Jerry took a senior field position with the major defense contractor Brown & Root, but during his first year, he fell from 20 feet in a way that fractured his back and cracked his skull. He survived, received a significant settlement, and has struggled ever since to regain as much function as possible.

I was on Jerry’s emailing list. He began to send out periodic stories from his past. They were fascinating, and the response from his list was remarkable. I saw their potential and contacted Jerry—we hadn’t communicated directly with each other in decades. I suggested that I work with him to compile his stories into a coherent whole and that we put out a book. He agreed, so we found a publisher who was willing to work with us on this strange project, and we completed the book last month.

Jerry’s book, Sŭbmarine-Ër: 30 Years of Hijinks & Keeping the Fleet Afloat, will be released on September 15, exactly 58 years after he enlisted. The book is on pre-publication sale right now as an ebook for only 99¢. The ebook price will rise to $3.99 on September 15. Each chapter has a color photo that illustrates the contents of that chapter. The trade paperback printed version has half-tone photos and will sell for $19.95. The hardbound, jacketed edition is in full color throughout and will sell for $36.95. Both will be available for pre-order within two or three days.

Why am I, Robert G. Williscroft doing this? Jerry is our brother—and he’s a genuine American hero. His story deserves to be told far and wide. I’m not here selling books. I’m here asking you to help me preserve the memory of one of the best among us. By purchasing the ebook on pre-order (only 99¢), you will help boost his sales ranking, so that on September 15, the release date, his ranking will shoot up. If you want the trade paperback, or the really cool hardbound, jacketed, full-color version, you can pre-order those as well from Amazon or any other online bookseller, or you can order it from your favorite brick-and-mortar store as well. Should you want an autographed copy, please use the Contact form at FreshInkGroup.com, and I will put you into direct contact with Jerry.

Thanks, John, and all of your readers for your support.

Call (516) 453-9902 or hashtag #FreshInkGroup in tweets during the show to communicate with the studio.

Use this link to join the braodcast.

Lieutenant Commander Jerry Pait’s semi-autobiographical collection of sixty stories recounts his thirty years in and around the U.S. Navy’s submarine fleet. Ranging from light-hearted to wrenching, all are poignant inside looks at naval operations rarely seen by outsiders. Topics include the real story behind the shuttle Challenger tragedy, risking his own life underwater, discovering a Soviet spy living across the street, surviving when a DELTA Rocket engine ignites, critical missions, and the everyday lives of men and women of the fleet. Dive into Sŭbmarine-Ër for hijinks and breathtaking adventure with this poignant memoir by a true American hero.

Digital editions at 99 cents during pre-sale are available in all major ebook formats—Kindle, Nook, Kobo, GPlay, iBooks, and 200+ more—worldwide. In addition, full-color jacketed hardcovers and softcovers are appearing at retailer sites over the next week.